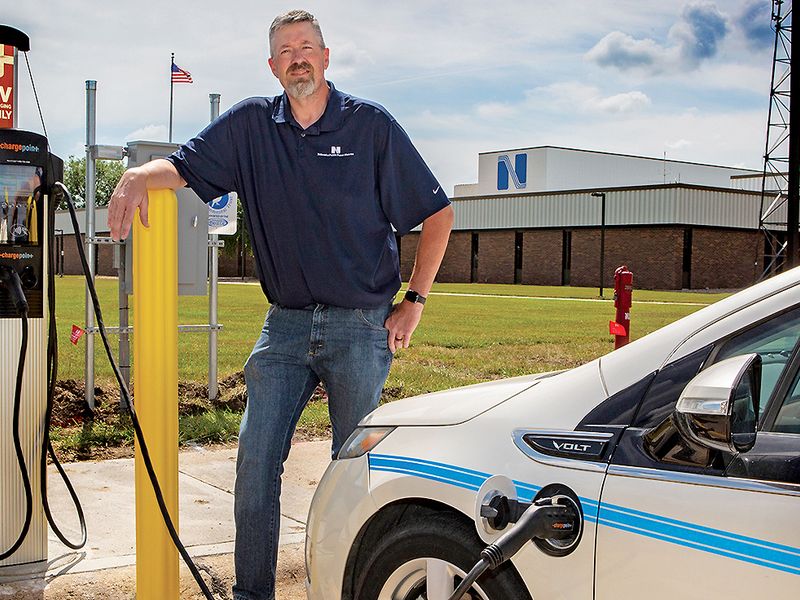 Nearly a century ago, a federal program to electrify America’s rural areas transformed their economies and brought them into the 20th century. Now, advocates of rural electric vehicle chargers say they will be crucial to bringing the nation’s small heartland cities, small towns and farming communities fully into the 21st century.

While the Biden administration’s new infrastructure initiative and most electrification efforts focus on putting chargers in dense metro areas, rural citizens also are getting some attention. The $1.2 trillion bipartisan infrastructure framework supported by the president currently includes $7.5 billion to construct a national EV-charging network along highways and in rural and disadvantaged communities.

Many rural chargers are being financed by state disbursements of funds from the $3 billion Volkswagen AG agreed to pay the U.S. in 2016 as a penalty for its diesel-emissions cheating scandal. In addition, VW-created Electrify America has committed to $2 billion in infrastructure spending, including placing chargers in rural areas.

The desire to proliferate EV chargers in the hinterlands stems from two interests. One is to keep rural states relevant and connected in the EV era by ensuring travelers can charge EVs even if they’re just passing through.

“The auto industry seems committed to converting to electric,” said Randy Smith, a program coordinator in the Nebraska Department of Environmental Quality. “So we are looking to provide community charging and encourage placement of chargers so that they would facilitate long-distance travel with EVs.”
The second need for EV chargers is to keep rural Americans apace with their urban counterparts in adoption of essential devices that govern life in a technologically homogenized society.

Rural residents may be less inclined to favor EVs. They also tend to like larger vehicles such as pickups. One-third of rural households have three or more vehicles, which would require more charging, compared with only 20 percent of such households in cities, according to research compiled by North Dakota State University. And as of 2018, their median income of $60,446 was $1,500 below the national median.

But there also are reasons to believe rural denizens are great candidates for EVs. The North Dakota study found residents are more likely to drive alone to work and have slightly longer commutes, and they’re much less likely to use public transportation than city dwellers. Also, they drive more, averaging 3.2 trips per day and 42.5 miles.

A group of 29 electric co-ops in Iowa, Illinois, Minnesota and Wisconsin last year invested more than $100,000 to buy and set up a network of more than 40 Level 2 and Level 3 chargers on interstate and state highways, then coordinated mobile apps so drivers could easily charge across all four states.

Separately, 17 co-ops led by Dairyland Power, based in LaCrosse, Wis., have applied for $4 million in federal funding to match their own $4 million to purchase a couple hundred more chargers to be spread across several states.

“Each of these co-ops already had local projects underway, but they have tremendous interest in growing their networks,” said Brian Sloboda, director of consumer solutions for the National Rural Electric Cooperative Association.

Despite such efforts, rural locations “generally don’t have sufficient grid circuitries” for EV fast chargers, said Desmond Wheatley, CEO of Beam Global. The San Diego-based company has been promoting its solar- and wind-powered, off-grid chargers as the ideal solution for rural hamlets as well as for other remote locations such as national parks.

Companies in rural America also are taking the lead. Love’s Travel Stops last year partnered with Electrify America to install 28 EV chargers in seven stations across six states. And ChargePoint is teaming with the National Association of Truck Stop Operators to spend $1 billion on charging stations at 4,000 sites in the U.S., with a focus on rural communities.

Convenience stores and fueling centers “are pivotal parts of communities and may serve multiple purposes,” said Anne Smart, vice president of public policy for ChargePoint, a maker of EV chargers based in Campbell, Calif. “When looking within rural communities we want to see full ecosystems, not just highway corridors.”

But there are concerns. “We haven’t dipped our toe in Level 3 chargers yet,” said Steve Wrobel, a spokesman for LaCrosse-based Kwik Trip, which operates more than 700 stores around the Upper Midwest. “If there’s going to be demand for it, we’ll answer that demand. We know we have to get there eventually.”

Mobileye tests fleet of self-driving cars in New York City
VW expects China EV sales to soar in the second half
Mitsuoka’s Toyota RAV4-Based Buddy Is One Of The Weirdest And Rarest Cars In Japan
Car-sharing firm Getaround to pay D.C. $950K for operating without a license
Ram EV will build on core message of capability